An Interview with Frank Fromy

Frank, who most of you know from the band Shub Niggurath, is with a new band called Unit Wail. An upcoming album is going to be released on Soleil Zeuhl Records soon. Here is an interview, conducted by Seiichi Miyasaka, with Frank from Euro Rock Press No. 54, translated into English. (Thanks to Udi Koomran for providing the information) 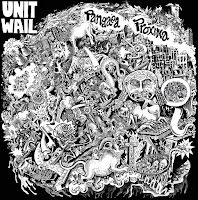 1. Your name seems to be both French and English. Please briefly introduce yourself. When did you start to play instruments, especially guitar? Who were your early influences ? Did you have any formal musical education ?

As a child, I lived a few years in London, but I am simply French and I lived in Paris most of the time. I had my first guitar (acoustic) at 15 years old and I played with my fellows the music of that time; the WHO, the DOORS, LED ZEPPLIN, etc.... I have no formal music studies. I am totally self-taught.

2. Was SHUB NIGGURATH your first professional band ? Please explain your musical career before it.

3. Please briefly explain how SHUB NIGGURATH was formed. The formation was very unique at that time, featuring a female singer and the trombone. Was it a natural progress in the process of forming the band? Or did you intend to make something unique from the start ?

Then came the idea of SHUB, with the meeting of the band " GORGONUS ", held by Jean-Luc Hervé. The partial fusion with "GORGONUS" and "APSARA" made SHUB-NIGGURATH. Ann and I joined Jean-Luc, Véronique and Alain. A drummer was missing. But for the first time, I found finally a band with serious ambitions. SHUB wanted to be a dramatico-romantic progressive rock band. From there everything went without saying, Véronique who before played the soprano sax changed for bass trombone, Jean-Luc added the organ and the harmonium to his piano, Alain used some effects (one of which is Fuzz) on his new bass, Ann took lessons of opera singing and had to sing in Greek or in Latin for SHUB.

4. SHUB NIGGURATH as well as Yog-Sothoth are from the Chthluhu Mythos of H.P. Lovecraft. Whose idea was it ? Do you think the sound of SHUB-NIGGURATH reflects the Mythos well ?

We did not want to make musical illustration. The myth of CHTHULHU of H-P LOVECRAFT was only a part of our inspirations. But the name of SHUB-NIGGURATH kept us in the right way. Do not betray The Black Goat of the Woods with a Thousand Young !

5. How did you develop the unique sound of SHUB-NIGGURATH ? The "Introduction" album reveals your starting points. Who were the major influences? Were you aware of Zeuhl (Magma) sound back then?

I think that it is the orchestral or / and symphonic aspect of our compositions and the choice of our instruments that made the sound of SHUB. From the beginning the purpose was to release us from our musical influences. Our inspiration came from movies and books with mythological, fantastic, dramatic, romantic character; even philosophic and surrealist. With the coming of Frank and his drum kit, we joined the Music Zeuhl and we were completely aware of it having gone to the great majority of the concerts of MAGMA.

6.How did you get the deal from Musea ? Did you send the demo ? Or did they find you?

Eager for works proposed by MUSEA, we quite naturally sent them our demos. These active and passionate members stuck at once, and from there began a long collaboration, close to the friendship, thanks to them.

7.. Please tell us about "Les Morts Vont Vite." I personally believe it was one of the greatest chamber rock album in the '80's and have listened to it more than 100 times. How did you write music for the album? How was the recording session ? Did it take long ? One of the attractiveness of the band is Ann Stewart's voice. Is she English? How did she join? How did you work with the other key member Jean-Luc Hervé ?

I am today still rather proud of the album, which remains a good realization... All the notes have been taken into account in the composition of the music, even for some solos. The work was made before the recording, repetitions after repetitions. The same rigor was brought to every song, composed by Jean-Luc or by me. We recorded in a magnificent studio in Paris region "Milk Shake Records". The recording set three days (on one 16 tracks). We played there live several times in a row the same composition and kept the best for the album. Ann is French with Scottish origin, she always sang with my guitar or in the 3 bands, until my departure of SHUB. Jean-Luc is an inspired and rigorous composer, in other words it was easy and difficult to work together. We made the effort of a real sharing, congrats to him.

8.After releasing "Les Morts Vont Vite" that was successful, you left the band. Why ? After that you released your first solo album, Quatre Axes Mutants. Please explain about this album. Is there any plan to re-release the album in the CD format ?

I left Ann, who was for 12 years my partner and the mother of my first son. The drama settled within the group… I preferred to leave... In the opera, there are practically all the musical expressions which are dear to me; even the blues. And as I did not have a band anymore, I wrote everything on partition and I went looking for an interpreter. Occasionally, I thank them all from the bottom of the heart for having rehearsed and played voluntarily for me; big respect... So that the album is republished in CD, I have to work on it a little, I will hold you informed.

9. In '00, you teamed up with ex-SHUB-NIGGURATH drummer, Ed Perraud and electronics player, Vincent Sicot-Vantalon, and released "Crypto Sensus" as TRIPLE ZERO. What kind of activities were you engaged in during between these two albums The musical approach was quite different with TRIPLE ZERO. What was the target of the album? What kind of musical activities did you do after the release and before UNIT WAIL ?

With the experience of SHUB I wanted to propose ideas which would facilitate the live sound recordings to free the performer of certain technical problems. I thus created a range of microphones and sensors systems specially studied for every instrument, under the brand " FWF systems " and since then, it is my job. With Vincent we crossed France and a part of Europe to make them known. A lot of music on the road... And on the way back we rehearse 6 months with Edouard P, one or 2 times a week. Then we recorded a first session in a squat (arranged in studio); and the second session in a very strange uninhabited house, with what is at hand. Later I left a little the guitar for the camera. We laid a movie (L'ombre du réel / The shadow of reality) with Manu, Vincent and a whole troop, but it remained very confidential. You will doubtless see some extracts in a video of Unit Wail soon. 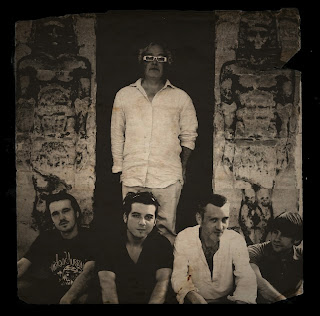 10. Now you're back with UNIT WAIL. Please explain the history of the band. When did you form the group? Please introduce other members to us. All the music was actually written by Vincent. Does it mean this unit is to express his music ? Is the band permanent or rather like a project?

It is especially Vincent who insisted so that I take back the guitar. Due to speaking about it we have eventually establishes the concept of the album (it was in 2010). It became very fast stimulant and we recorded some models with Adrian Luna on bass guitar, Emmanuel Pothier on synth and Sebastian Arce as drummer, but this one had to leave to Chile. This is when Philippe Haxaire (drum) arrived, and the hard core of the group was stood out by himself. The rhythmic of Unit Wail is solid, Adrian and Philippe are the youngest but their studies in the C.I.M. and now in the C.R.R. make of them hardened musicians. Manu and Vincent are independent composers; I crossed their road approximately 20 years ago, we are on the same wavelength and the ideas multiply when we are together.

11. Please explain the process of writing / recording. Was it like Vincent brought in an idea and other members developed it together? Or Vincent prepared a complete arrangement and you played it? How about other members contribution to arrangements.

A rhythmic and harmonic skeleton is proposed by Vincent, but we are free to interpret our part as we like. Things are done simply, the compositions come to life, the overall vision of the compositions is in Vincent's hands and we count on it. 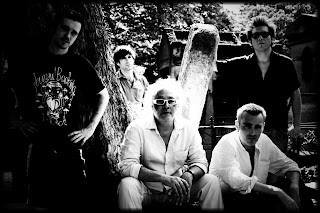 12. How long did it take to record the album? There are one guest bassist and one guest drummer. Why did you use them?

We really took our time, around two years and a half passed between Magnétostriction (our first recording) and Home of nowhere (the last one). Udi Koomran (who kept an eye on our work) recommended us James Hugget (from "Combat astronomy") for is very dark sound for Ombos, we made a very concluding essay with him and we all agreed on the fact that inviting some guests to emphasize a style or a mood was a real bonus. Also, we will continue on that direction.

13. What does the album title mean? Artwork seems to be inspired by Lovecraft or some other horror writers. Or is it just a coincidence?

Basically the concept is more Science Fiction. It's the story of a new super-continent and of its citizens ; After of millions of years of evolution, the megalopolis / continent is transformed into a massive spaceship, it explodes of madness and goes to ... Kobaia? Martin evoked the moment very well and knew how to do this by adding his personal touch. The inside meanwhile illustrates a sort of compacted madness (myths, findings, beliefs ...) of that civilization.

14. Please tell us about your schedule such as follow-up tour for the new album, festivals, sessions, etc. as a band and as individuals.

We would like to finish a second album (it should be done faster than Pangaea Proxima) and if everything goes well, we expect to be doing some concerts on 2013.

15. Last but not the least, please give your devoted fans in Japan a message.