From a friend comes the following information:

A Coltrane homage was recorded between July 17 and July 23. This is the second album recorded in Stella and Francis Linon's new studio in Nice, the first one being the album by "Marcus and the Music".

The first track of this Tribute to Coltrane is "La Ballade". The musicians are PM Sivadier, Simon Goubert, Frédéric D'Oelsnitz (piano) and his girlfriend (chorus), Philippe Dardelle, Stella, a friend of Stella who is singing teacher, Isabelle and many others. The release date is September 27th.

There are also some non-Coltrane compositions on the album. These compositions were composed by Christian Vander, Philippe Dardelle, PM Sivadier, and others.

Mr.Calyx, who I have always found to be the most knowledgeable person about progressive music out there, has posted some updates about Magma on the Progressive Ears website. I will try to summarize.

1) Magma is going into the studio in early September to lay down the tracks for their new album. So far, only Felicite Thosz will be on the new album. Slag Tanz will NOT be on the album, as Vander says that the two pieces would not go very well together. Something that I find odd, since they have been playing Slag Tanz and FT back-to-back since early 2009.

2) Christian Vander is going into the hospital in September for an operation on a herniated disk. So, CV had to cancel his appearance at this year's RIO festival.

3) Zess will NOT be recorded for the new album.

This is from the blog at http://patibulaire.blogspot.com/. 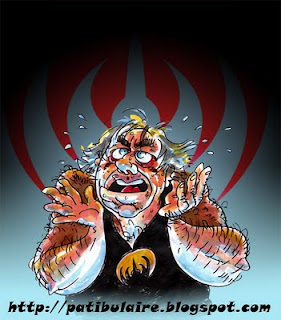 This promises to be a good concert. Benoit has a nice arrangement of E-R that was played by a student jazz ensemble last January. Maybe there will be some other pieces that will be arranged? Maybe a nice version of Mekanik Machine? :-) The Ptah Tentet is Playing Some Magma Tunes

I wish I was in France to see this concert. Michael also does a great job with the Magma tunes. 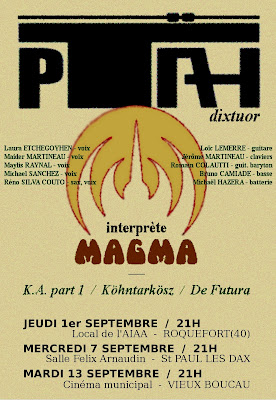