I decided to create this page to celebrate the reformation of Eskaton.

Feel free to join and converse with other Eskaton fanatics.
Posted by marc at 10:06 AM 1 comment:

The new lineup is:

The new band is being referred to  as Eskaton 2.0, and their new website is here.

Here is one of the three videos that they posted on YouTube. 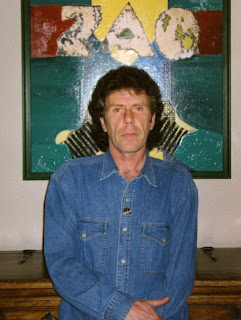 It's with great sadness that I have to report the death of our friend, Alain Juliac, after a battle with cancer. Alain died peacefully, with no pain.

I first met Alain in the early 1980s. He was good friends with Bernard Gueffier, and Alain worked with Musea Records from the start, and was also a writer for Notes magazine. I met Alain again in Nancy in October 2007 when I went to see a series of Magma shows.

Steve and Kavus Talk About Magma and Life

Here is an interview with Steve Davis and Kavus Torabi. Of course, Magma is mentioned very prominently.