Thanks to Denis for this graphic.

The Kohntarkosz Blog is right in the path of the Frankenstorm.

We need Kreuhn Kohrmahn to keep us safe.  Maybe I can catch the next rocket ship to Kobaia before the storm gets here. 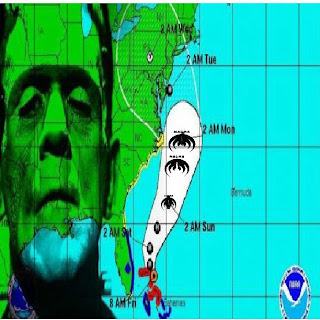 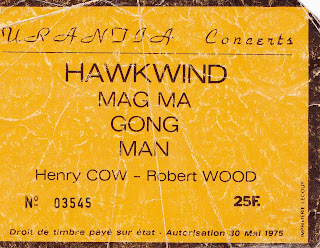 Our good friend, Andy Bole, contributed this photo of a ticket to a concert from May 30, 1975.

This concert is not listed in the Ork Alarm tour guide. Does anyone have more information about this? Memo?

Photos from the Rehearsals of Metalik Orkestra

More info about the concert here:


The TOURQUENNOISE CULTURAL ASSOCIATION (2-136937) presents: this concert. MAGMA invites the Jazz Department of the Conservatory of Tourcoing Municipal Theatre Raymond Devos at Tourcoing legendary group founded in 1969 and still led by drummer / composer / singer Christian Vander, Magma will a concert in collaboration with the jazz department of the Conservatoire de Tourcoing.
Posted by marc at 7:18 AM No comments:

Memo has a Blog !

The Memorizator, Mr. JC Alluin, has tossed his hat into the ring, and now has a blog on Zeuhlish music.

Good luck, Memo. I want to see you dig up some new information on the classic Magma period (1972-74). Maybe you will share some PDFs of Klaus's diary ? :-)

Jannick Top and The Peppers


Below is a note that I received this morning from a reader of this blog. The transition that Jannick made from Magma in 1974 to The Peppers in 1975 is mind-numbing.

I love your Magma blog.  It's a great resource for someone like me who loves Magma and Zeuhl but isn't totally plugged into the prog rock scene.

Anyway, I'm friends with a producer named Neil Kernon (who won some Grammys in the 80s, and worked as maybe a second engineer on some Magma stuff in the 70s, but nowadays mostly produces death metal) and he passed this video on to me:

"Here's an old track that I mixed in the mid '70s. It was actually quite a big hit in Europe but I haven't been able to find it until now. I also mixed their previous single.

By far the best part about this one was the bass playing. I told the producer that I thought the bass player was awesome and that he sounded just like Jannick Top, and he freaked out and told me that it WAS Jannick playing on it. :-)"

It's definitely not Zeuhl, but as a historical curiosity it's fun to know about. I thought you might appreciate it.