I originally was not going to go to this show, as I had already seen this set-list 4 times in 2009. However, I convinced my old friend Nick from Dr. Nerve to go, so I was glad that I had some company, I also met old friend Zeeker and new friend Keith there.


The set-list was the same one that they have been doing for the past two years.

1) Slag Tanz - this was a revised version from the original version that I saw them perform at Le Casino in early 2009. It seems to be moving in a more Offering-like direction, which is consistent with Vander's compositional direction nowadays.

2) Felicite Thosz - well, what can I say that I haven't said already? I used the song as an opportunity to eat my dinner.

3) E-R - well done. Grandcamp's guitar added another dimension. He was more forward in the mix than MacGaw usually is. During Grand zombies, you could really hear Grandcamp's guitar swells, and it definitely enhanced the atmosphere of Zombies. Vander pulled out one or two new drum licks. E-R was extremely well received by the audience.

4) Kobiaia - very noisy, very rambunctious, very much fun. Vander looked like he was having a great time.

From my vantage point in the balcony, the sound was very muddy, and the vocals were a bit under the mix. This could be just related to my gradual loss of the upper ends of the sound spectrum, so I will give Francis a break on this one :-)
Posted by marc at 7:01 AM 2 comments:

I am a bit surprised that nobody has shared their recordings from the recent 2-day US tour. I have been looking at DIME every day, hoping that some kind soul would be seeding their recordings. I know that half of the people at the Highline gig had recorders and movie cameras. So, if you have any mementos from this show, please consider sharing them on DIME, Demonoid, or Soulseek.

Also, a recording from the Univers Zero gig in Washington would also be welcome.

The guitarist from Voxnostra is Jean-Claude Delachat, who played in the De Futura cover band along with Fanny Layani and Barfix.

Let me know what you think of this tune.
Posted by marc at 7:09 AM No comments:

My Photos from the Highline Ballroom Show

I was sitting in the balcony with my old friend Nick from Dr. Nerve. 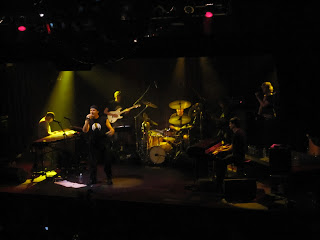 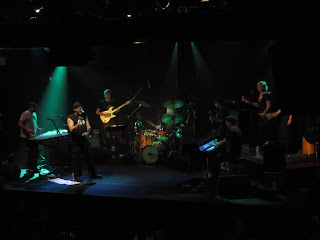 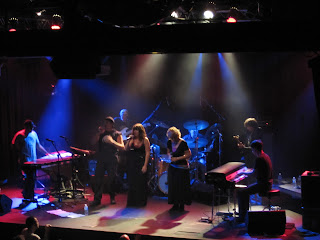 Photos from the Magma Concert from the Brooklyn Vegan Site

A review of the Magma show at the Highline Ballroom on the Rolling Stone website.

I will write my own review when I get some time.


Here is a copy of the Rolling Stone review, taken from their website. All copyrights are from Rolling Stone Magazine, and the article is reprinted here without the explicit permission of Rolling Stone. (If Rolling Stone wants me to remove the text, then contact me.)

Since its inception in 1969, the French progressive-rock ensemble Magma have made a curiously heavy music: a dark complex momentum in which the drums — played by leader-composer Christian Vander — are the forward instrument, often flanked by heavily fuzzed bass guitar and the hard watery ring of a Fender Rhodes piano, with an operatic chorale narrating, in a made-up language, extended fictions about the people and wars on the planet Kobaïa. Magma's rigorous, eccentric execution of Vander's continuing fantasia may be the least likely survivor of rock's Euro-prog peak in the early and late ‘70s. (A Philip Glass spectacle girded in doom-metal chain mail is a distant but not inappropriate comparison.) At New York's Highline Ballroom on September 20th, Vander and his wife, vocalist Stella Vander led a Magma in which most of the other players looked a lot younger than the band itself. But this Magma also sounded, amazingly, very much like the one that made the 1970 debut, Kobaîa. In fact, the encore was the title song from that double-album.


Everything else the eight-piece group played was new: two as-yet-unreleased pieces in the first hour; all of the 2009 album, Ëmëhntëtt-Rê, in the second. The lyrics were literally alien and the singing just as otherworldly — Stella Vander, Isabelle Feuillebois and Hervê Aknin alternated between eerie passages of medieval-like chant and martial ensemble arias — so the power in the music was entirely physical. That had a lot to do with Christian Vander, a John Coltrane disciple who combines a jazz drummer's language and touch with the heavy British agility of Bill Bruford and Mitch Mitchell. One mad passage in the second hour was a high-speed series of tortuous Vander figures matched with pinpoint timing on the other instruments, like the tangled bridge in King Crimson's "21st Century Schizoid Man." Another section was hellish grandeur: fat pounding chords, laden with low booming overtones, with the vocalists accenting Vander's drum spasms with unison crashes on hand-held Chinese cymbals.

The Highline show was part of a short tour — two dates — by a band that in its initial heyday seemed more like a myth, issuing strange records from an imagined quadrant of the universe. And there were moments when this band fell a little short of the legend, as when pianist Bruno Ruder took off on a long unaccompanied solo that was, for all of its energy, not much above heated noodling. Even with his distortion set on lethal, bassist Phillipe Bussonnet couldn't quite match the truly devouring tone of Magma's great mid-‘70s bassist Jannick Top, a guy who sounded like he had Bootsy Collins and Lemmy of Motörhead coming through his strings at once.

But that is connoisseur talk. After four decades, there is still nothing in rock — prog or otherwise — like Magma. At least in this world.
Posted by marc at 5:52 AM 5 comments:

From my friend Rodolph, here is a ticket from a Magma concert in Lyon in 1976 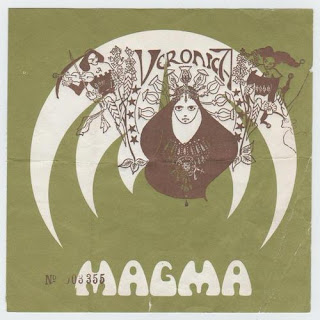