After spending two days in Athens (right before the Parliamentary vote), and another ten days in assorted Greek Islands (Crete, Milos, Mykonos, and Santorini), I found myself once again aboard a flight to that strange country known as France, a country so strange that they don’t have Perp Walks. I took a slight detour from Greece to the USA so that I could see the latest series of Retrospective concerts from Magma.

I am at the point now where I have seen Magma enough times (for an American) that I use the Magma shows as an excuse to go and see my French Zeuhl friends, the ones that I have made over the years of seeing Magma shows, trading tapes, and being friends on FB. We always try to have one big Zeuhl Lunch during the concerts, and this time was no exception. Lunch was at Louchebem, in the Les Halles section of Paris. This restaurant is a tribute to meat, and I seem to have impressed my French friends by ordering Terrine de Tete de Veau with Sauce Gribbish as an appetizer. 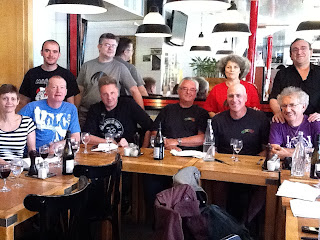 It was good also to catch up with my friend, Marco Tchamp, who used to do a lot of photography for Magma. Marco has two ventures that he is working on now. He is cooking made-to-order macaroons in all sort of flavors, and he also just published a beautiful book of photos of the concentration camps of Poland. I visited some of the camps a few years ago, and the book really does bring back memories. 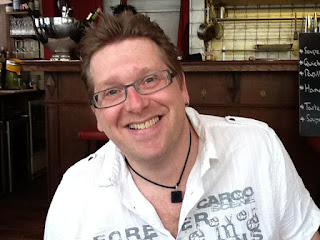 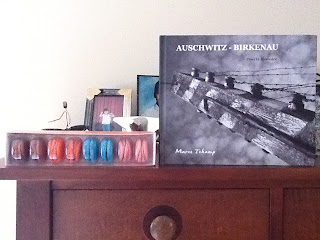 Magma is going to be coming out with another DVD in their Retrospective series, and the next DVD will feature this current show. They also are going to have some filmed interviews with Magma fans from around the world. If I don’t piss off Francis and Stella in the next few months, you might even get to see yours truly.

As always, there were the odd international fans that managed to find their way to Paris for the show. There was someone from Holland, three fans from Norway (including one from upper Norway, close to the Arctic Circle), and I heard that the previous week, one intrepid fan from Japan. I think I was the only Yank there, and there were definitely two Brits in attendance.

All were crammed into Le Triton for two weeks. For the three nights that I was there, there was standing-room only. Lots of people packed at the bar. It was extremely hot at Le Triton, and from Maxence told me, there was a flu that was going around. I caught a bit of it after Saturday night’s show. Suggestion to the owners of Le Triton … invest in an air conditioner.

The setlist was exactly the same each night. No variations at all.

In my opinion, the setlist reflected the current tendency in Magma to move back to the more vocal, Offering-like period. Pieces like Retrovision and Dondai tend to emphasize the vocal aspect a lot more, and Vander seemed to be more subdued behind the drum kit than I ever remembered.

Retrovision came from my least favorite period in Magma history, the era in which they sprouted strange costumes and fashioned themselves as a soul band. The male singer (Herve, in this case) goes into some sort of Master-of-Ceremonies rap, from what I could tell, while a funky beat backs him up. There are some moments of Zeuhl that come through for about 5 minutes in the middle, but to me, this song does not represent the Zeuhl aspect of Magma, and the lyrics are a bit confusing ("On a dit Magma n'est pas la?")

This was followed by Riah, a monumental work that was the cornerstone of the 1001 album. The band was on fire on this piece. Very tight. The guitar took most of the horn parts, which was a bit of a shame, since I saw both Guillame Perret (of Electric Epic) and Mederic Collignon hanging around Le Triton, and I was hoping that Christian drafted them to do the horns. Nevertheless, a big kudo to James for handling these parts. I put a few video clips up on YouTube of some of Riah, so let me know what you think.

Thank the Lord for the intermission, because by that time, everyone was about to pass out from the heat. Grabbed a Pelforth (a French beer), and went outside for air. Good vibes, Magma fans milling around, discussing how great Riah was. Seeing Riah performed made the trip worthwhile.

After intermission, a short Dondai. Again, continuing along the lines of soulful vocals. Not much to report here.

Then came Felicite Thosz. Readers of this blog know that I am not a big fan of this piece, and Francis Linon was teasing me after one of the shows by saying that they were going to play FT for me three times the next night. I detected a slight increase in the power level during the opening bits, but that increase was neutralized by the length of Bruno’s piano solo each of the three nights. The piano solo seemed to be extended for some reason, and because of the steamy conditions at Le Triton, it was a bit tortuous to listen to streams of arpeggios for ten minutes. Sorry, Bruno … you’re a really good keyboardist, and the solo had some good ideas in it, but it was a bit too much, especially with the celeste-like tone of the piano.

Next up was Slag Tanz. I have noticed that this piece has continually improved since I first saw Magma perform it at Le Casino in February 2009. Now, the piece is total madness. The three vocalists were shaking maracas and screaming during the entire piece, which gave the piece an “Evil Steve Reich” kind a feeling … which is a good thing! The vocal lines are more composed, and you can detect more counterpoint in the vocal lines. Magma will be going into the studio soon to record their next album (which will contain ST and FT), and it will be a challenge for Francis to reproduce the excitement that you get when you witness Slag Tanz in a live setting.

The encore for each of the nights was Maahnt. The first night clocked in at only 3 minutes, but the next two nights saw the band jamming out a bit on the Maahnt theme. Great playing by Bussonnet on this piece, and Herve tried to implement as many of the sound effects as possible. Benoit Alziary had a Theremin set up behind him, so he was able to reproduce that important effect from the album.

One thing that I have to say about Benoit is that he seems to have stepped up and is playing an important part in the new era of Magma. He was the arranger for the student-led jazz band that performed E-R back in January 2011, and he will be arranging additional Magma pieces for another student-led orchestra concert that will take place at Le Triton on December 16th.

My biggest disappointment was that Magma did not play Mekanik Machine as the second encore on Saturday night. My fantasy was that Jannick Top was going to appear on stage and rip into the bass line of MM. Bussonnet would have been a very capable second choice. It was leaked through the grapevine that Magma was going to perform MM, and I was disheartened when the lights went on after the encore on Saturday night.

I asked Memo about this, and if I understood his French correctly (which is always a big challenge for me), he said that Magma did not have enough time to practice because the new pieces were difficult.

I noticed was that some of the musicians and vocalists were reading from sheet music. This tended to lead me to think that these pieces were put together a bit quickly, too quickly for the musicians to completely memorize everything and for the vocalists to memorize all of the Kobaian lyrics. This would lead me to believe that Memo was correct. Vander, the perfectionist that he is, would not have wanted Mekanik Machine to be played if it was anything less than perfect.

Three nights of the same setlist was a bit much, but seeing Riah and Maahnt performed live made it worthwhile. The band was in top form, they seemed to have a good time, the audience seemed to enjoy themselves, it was a good atmosphere despite the stifling heat, and overall, it was worth the trip to Paris.