This is the cover of the re-release of the first One Shot CD. Thanks to Zwen for the pointer.

(Editorial)
As mentioned here before, the new version of One Shot has Bruno Ruder on keyboards. Some people think that it is better to have One Shot exist with a different keyboard player than have One Shot not exist at all. Personally, I am not in agreement with this line of thought. With the number of groups that MacGaw and Bussonnet play in, it would have been easier to just form another group with a different name rather than disrespect Manu Borghi. 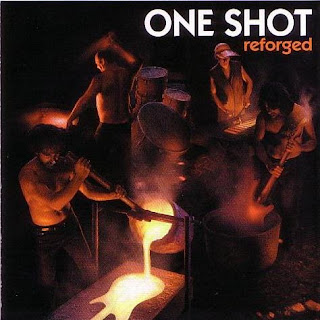