Here is a scan of a review an Italian magazine named Vinile. Thanks again to our new friend Gianmaria. 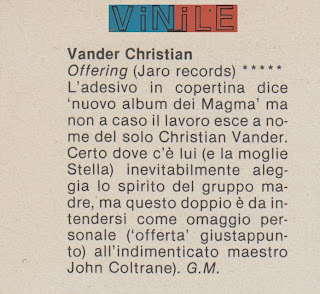 Hello Marc, here's a scan of a review from "Vinile" n. 1 (Fall Winter 1987) a music magazine (every issue included an e.p.) which was published by Stampa Alternativa, the underground press agency which brought Gong, Henry Cow and Wyatt in Roma for the free concert in Piazza Navona to legalize cannabis.

Here's a translation for those who don't understand Italian:

The sticker on cover says "New Magma album" but it's no accident that this work is credited to Christian Vander. Whenever he's present (and his wife Stella as well) the spirit of the mother band inevitably hovers about, but this double album is meant as a personal homage (an "offering", precisely) to the unforgotten master John Coltrane. G.M. (Gigi Marinoni).