Club Europa is a Polish club and discotheque that is in the Greenpoint section of Brooklyn, a neighborhood of working-class Polish immigrants. In the summer of 2007, someone decided to promote a few Progressive Rock shows. Magma played one week, and Hawkwind played the next week.

This gig was booked at the last minute. Magma played the Nearfest festival the very next day, so this was a good warm-up gig for Magma. I expected a very small audience, given the facts that it was in Brooklyn and that most Magma fans would already be at Nearfest. But, about 200 rabid Magma lovers showed up. I brought my son to his second Magma show, and he loved it.

Magma played a good gig, and the fans would not let them leave the stage. The promoters were very strict about keeping Magma to a 90 minute time limit, because after the Magma show, the club was to turn into a disco. As we left the club, there was a line of people who looked like they were ready to do The Hustle until the wee hours of the morning. 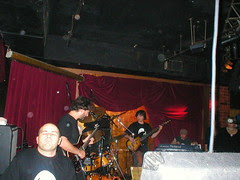 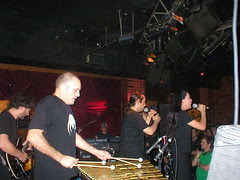