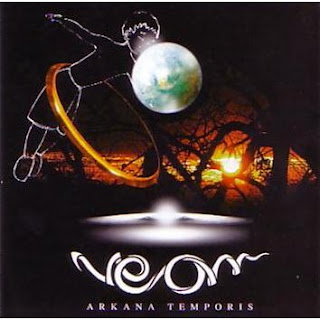 During the RIO Festival, I got a chance to hang out a bit with William, the bass player from a French Zeuhl-inspired group named Neom. They come from around the Valence area in South-Eastern France, and in fact, they opened for Magma on May 1, 2009 in Bourg Le Valence.

I bought a copy of the Neom CD, Arkana Temporis, from the Soleil Zeuhl stand at the RIO Festival. When I played it for the first time, I thought that it was a good CD. But, last Monday, Steve Davis played most of the CD on his radio show, and everyone REALLY got into it. Yannick and Carole from Neom (guitar and keyboard) were there during the show, and provided a running commentary to the music.

You can order the CD from Alain Lebon of Soleil Zeuhl Records here. You can listen to some of their music here.
Posted by marc at 2:33 PM