This article is about various drummers. Google Translation below. 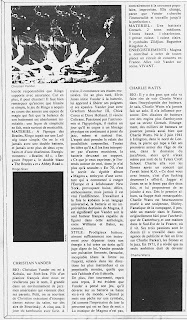 BIO: Christian Vander was born in Magma on Stoh Iwa. The son of a French pianist we will not disclose the name, he grew up in an environment of American jazz musicians who come to her parents. Little is remembered of Christian performing strange dances around the room, the tunes of Stravinsky. At five years, he plays the tambourine furiously. At thirteen, he began his musical studies. A year later, Vander initiates Elvin Jones on drums, he learns to free his wrists and shoulders, Vander plays with Gracham Monchur III, Chick Corea and Dave Holland. He venerates Coltrane. Fascinated by astronomy and Egyptology, he realizes one day that he bumps into a physical blocking by continuing to play jazz, even and especially free.The spirit must take over potential harm. All ideas he has, he will interpret other musicians, the battery becomes a stand. "What I want to express, I hear around me, so I have only chanting. "In 70 is the release of the double album" Magma "embryo of an adventure that began to gnaw Europe and New York splash, causing hatred, delusion, enthusiasm, but it is never true indifference. Working both the kobaïen (a "universal language"), drums and unpredictable destinies of Magma, it is significant that Vander is the only French drummer can appear in this anthology, between Williams and Baker, at the top.

STYLE: Prodigious drummer, loving his instrument enough to spend all his energy to create for him a case he deems worthy of him, Vander has a pulse frenzied, fierce, copy protected (in the form or spirit), exploded in the directions The most unexpected and constantly rising, whatever the altitude from which it departed.


Also, be tormented, restless mind, it is clear that Vander thought his game, he pours his drums hatred vis-à-vis the world. " "When I put a peach on a cymbal, I feel like killing the person in front of me." Magma's music is not, contrary to popular belief, improvised. It changes because Vander "seeks immortality and works to perfection.