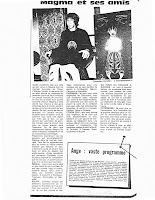 What a great idea that is coming to Magma's French tour in the winter. Christian Vander and his friends have decided to present part one of their concerts a French province, a total of six groups to four concerts each. Magma has given their chance to people trapped in the narrow circle of their province out of their ghetto. In fact, none of these six groups has ever made except in the region, and there they all play in a region that is not theirs, which should enable them to make contact with the rock circuit to then launch into the adventure. One can only warmly congratulate this company Magma intelligent and sympathetic that sponsorship.

We now apply these six groups to accompany Magma in its winter tour. All six belong more or less the same musical universe as Magma and Zao, that is to say they are all in denial of plagiarism of Anglo - Saxon, an excellent thing that will give rise to a competitive and original music that is not a poor relation to whom we will only alms.

MASAL we've already talked a bit about these Lyonnais, they have horns and crazy accurate, since 1973 there are 5 (both sax, drums, keyboards, bass), they will play in Bordeaux, Toulouse, Montpellier and Marseille.

XALPH: Christian Vander is so impressed by this group of Bordeaux that will produce their first LP on Utopia, they have brass and impeccable ideas for music that's perfect, they will be in St Quentin, Macon, Grenoble and Clermont .

CARMINA: they are five, are from Chaumont, with enough original training in addition to the duo bass drum, only includes saxes, they play cards cohesion more than talkative individuals, they will be in Limoges Poitiers, Tours and Orleans.

Etron Fou: they are more original, they are only three (bass drums and sax), inhabit a godforsaken corner of the Ardeche, moving into an old 403 and make an intelligent and curious music, very complex, despite the small effective, they will play in Rennes, Brest and Rouen Eaubonne.

AU FOND DU COULOIR A GAUCHE : A mouthful, six musicians, including two brass, will create a popular music that is truly European and not stupid, they were part of Soft Toulouse, although they came from Bourges. Vous les verrez à Lille, Metz et Strasbourg. You'll see them in Lille, Metz and Strasbourg.

Potemkin: they are five and Toulouse, their training is the most classical quartet violin, they do recognize the jazz-rock, are closer than other groups of Anglo-Saxon and will play at least Nevers and Reims.

Good luck to all and will therefore encourage them: you may have good surprises.