This article comes to us through Mr. Korrigan, whose father-in-law Henry is a huge Magma fan since the early days. Henry has a lot of old documents, and I will try to reprint some of them here (with Korrigan's permission, of course).

This article is about Magma's appearance at the Chateauvallon Jazz festival in 1972. 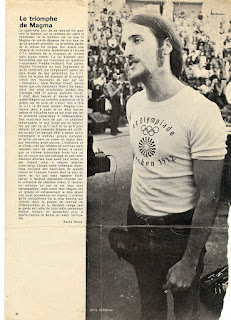 The fourth day of the festival was my last, because I returned to Paris the next day and the best fit for what Magma that evening far surpassed anything we could expect. The first part of the evening was long. On stage a dozen musicians belonging to the stable CTI played music variety without interest. This was all the more lamentable that the musicians in question were called Freddie Hubbard, Ron Carter, Stanley Turrentine and Jack DeJohnette and they intend (or intended) of the most gifted of their generation. This C.T.I. show was the finest example of recovery of jazz by the "turners" style Norman Granz. No doubt that these gentlemen will do fine evenings the next twenty years, Carnegie Hall and other places dead.

It was half past two in the morning when magma could take possession of the stage because in addition to having nothing to say CTI said slowly. Magma begins to play and two hours sweeping and ridicules everything that had been previously submitted to and Châteauvallon. The outstanding musician, a remarkable singer, all led by a crazy drummer who knows what he wants and what he can get, as this is Magma which confirmed what we already believed, namely that they are the best European group and they may arise in the face of monsters equal Anglo-Saxon. The atmosphere and the climate created by Magma are not unlike those of James Brown, that the hypnotic rhythm crushes everything in its path and hungry machine that swallows you whole if you happen to take leave your finger. Faced with this demonic rhythmic change of high-class musicians like Francois Cahen, whose piano solo was reminiscent of Keith Jarrett. It should also emphasize the virtuosity of the singer Klaus, he would name them one by one as all are outstanding, but above all Magma is a group and certainly the largest that we had in France. The ovation they gathered was the most enormous sounds in the pines festival Châteauvallon and the last image I retain is that of three thousand people standing, screaming, asking over at half past four in the morning.

Unbelievable.
Posted by marc at 6:12 AM