When I was at Chez Steve Davis this week, I took a look at some of the photos that the late Paul Mummery has accumulated. These two photos were labeled "1974-05-08", which is the date that Magma played in Frejus, France. Frejus is a town that is close to Cannes and Nice.

The photos look like a snapshot of a television program or video. Also, look at the "6" logo at the top-right corner. This looks like the logo from a television station.

So, perhaps somebody filmed this concert for a TV broadcast or for a video release.

If there is video footage from 1974, it would be an incredible find.

Can anyone shed some light on this? Is there a TV station that has this logo? Can some Magma footage be sitting in the archives of some TV station in France?


Update - It looks like the logo is from French music channel M6. Thanks to Hanwaker and Olmain. Now, we have to find out if M6 has this footage of Magma. 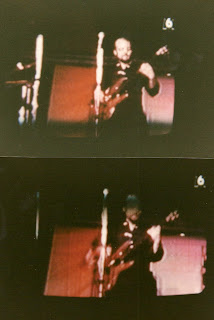